She Was Pretty (Kdrama review)

My pandemic discovery has been a new love for K-dramas - that is tv dramas from Korea. I have little Korean language experience (other than a brief trip for 2 weeks to visit an expat buddy teaching English, and living in Queens, NY lol) however the stories and humor in K-dramas are totally universal, but yet are told a bit differently than they would be in Western media. As a writer, I’m interested in different methods of storytelling, so every once in awhile, I’m probably going to start posting some thoughts about the different shows I’ve been watching. 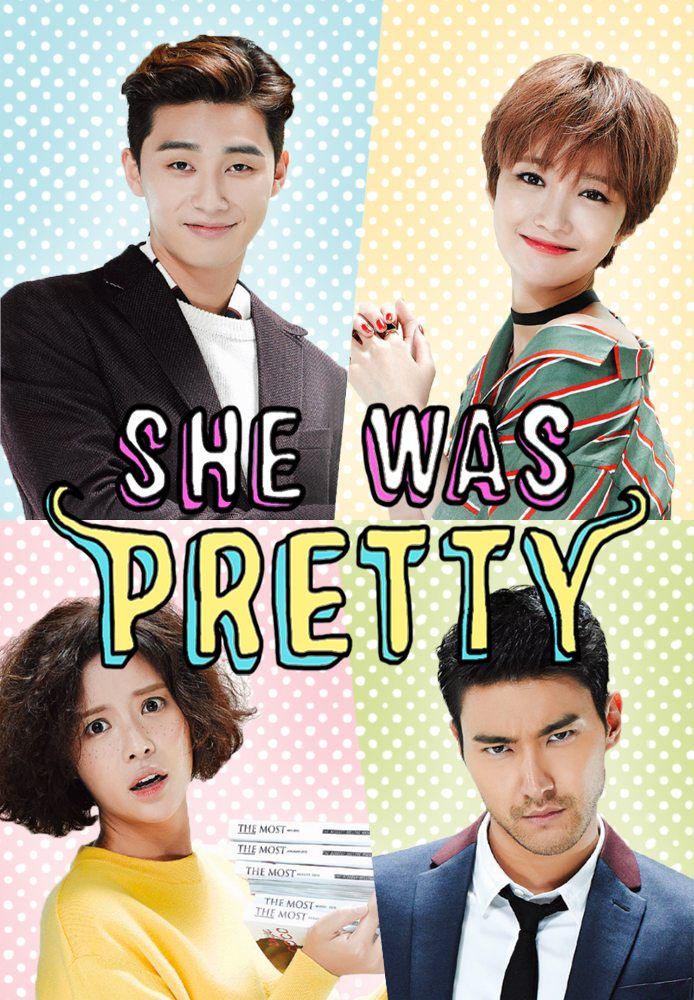 I really enjoyed this office romantic comedy that twisted the ugly duckling trope! Other tropes features in this show are childhood friends/reunion, switched identities, office romance, little of enemies to lovers, as well as a sort-of-love triangle.

When Kim Hye Jin (played by Hwang Jung-eum) was the pretty girl at school, she befriend a fat shy kid named Seung-Joon who lived next door. After his family moved to America, they lost touch. Fast forward to the present day where Hye Jin has lost her looks (according to Korean standards, which means she now has fluffy curly hair, ruddy cheeks and freckles) is a 30 year old unemployed woman trying desperately to get a job.

When Seung-Joon returns from America on a visit and calls Hye Jin to meet him Hye Jin readily agrees. She's looking forward to seeing her old friend again. But when Seung Joon (played by the ever swoon-worthy Park Seo-Joon) shows up he’s a tall, hot clearly well dressed man, and walks right past her. Desperate not to let her old friend see how much she’s sunken in beauty and status, Hye Jin asks her best friend / roommate Ha Ri (Go Joon Hee) to pretend to be here for that one meeting. By Korean beauty standards Ha Ri is a knock-out with her big wide eyes, v-shaped chin, pale skin and slender figure, and so it would be logical for Seung Joon to think that’s how she grew up.  Seung Joon, contrary to what Hye Jin thought, is back in Korea to stay for awhile, and wants to rekindle his friendship with his childhood friend Hye Jin.  Ha Ri (pretending to be Hye Jin) is utterly charmed by how Seung Joon treats her: like a person and not just a pretty thing.

(Look at Seung-Joon, played by Park Seo Joon, all grown up!)

Meanwhile Hye Jin does manage to find a job as a lowly intern (hired precisely because of her unremarkable looks - the manager says pretty girls leave after a year to get married but who would want to marry her?). She ends up being transferred to the very fashion magazine that Seung Joon has come to Korea to take charge of.

Like in the K-drama office romcom What’s Wrong with Secretary Kim (one of my favorite K-dramas ever), the actor Park Seo Joon does an great job of playing a tough aggressive boss here in She was Pretty. Watching She Was Pretty, you totally see why he did such an amazing job in What’s wrong with Secretary Kim. However in this one, Park Seo Joon’s character, Seung Joon is a bit more vulnerable. He is the definition of all work and no play, and has no family, no friends in Korea, and is so demanding on his employees that he comes off almost as a toxic boss.  I have to admit in the first few episodes I thought Seung Joon was just too mean and was rooting for Hye Jin NOT to end up with him. Seung Joon had no compassion at all for Hye Jin’s mistakes as the new intern, and constantly demeaned and belittled her in front of the entire office. To be fair, that is also common practice in Asian workplaces, so perhaps it’s just my American sensibilities sticking out.  (but of course there are  backstory reasons for Seung Joon’s intensely pressured behavior.. But I also thought Hye Jin’s antics and mistakes were perhaps a bit too over the top; I mean if I were her boss, I would be just as frustrated as Seung Joon.

Of course, it doesn’t help that Ha Ri continues to secretly pretend to be Hye Jin to meet Seung Joon on the side.

It’s the secondary characters, I think that really elevate this K-drama, in particular:

The friendship between Hye Jin and Ha Ri, I think is what sets this apart from so many other romcoms I’ve seen.  I really wanted to hate Ha Ri; after all she’s the pretty girl, who gets ALL the guys, a rich girl who had her job, apartment and everything handed to her by her chaebol father. But  she’s also someone who is deeply insecure and lonely — Hye Jin is really her only family. Later when Ha Ri’s subterfuge is discovered, Hye Jin, despite being furious (and in throes of developing awkward feelings for Seung Joon), understands why Ha Ri did what she did. Ha Ri realizes how much she hurt her friend and is deeply upset at herself. I have to admit, at first I didn’t buy Ha Ri’s regret because I wanted to see her suffer. But Ha Ri uses this as her transformational moment to realize she has never really had to struggle for most things in her life, and she decides to sell all her things, cut up the cards her dad gave her and figure out what to do for herself on her own. In the end, I love that the friendship between the heroine and Ha Ri remained strong as ever.

Kim Shin-Hyuk (played by a very hot Choi Si Won)  is the secondary male lead. He’s a cross between the quirky jokester and cinnamon roll hero. What I love about him is that he ends up befriending supposedly ugly duckling Hye Jin BEFORE the makeover / transformational moment that you know is coming. (In fact, afterwards he’s like NO! What did you do to your freckles your best feature?) He genuinely likes Hye Jin as a person. But he’s also a trickster in that annoying middle-school boy way of teasing her to get a rise out of her. Sometimes it works, and sometimes, I thought wow he was being a total jerk. But in the end, even though he really wants Hye Jin to “look at him” (as he says to her when she’s asleep at her desk after working past a deadline), he pushes her towards Seung Joon because he knows that’s what she really wants (even though his heart is breaking). In the middle episodes, I REALLY wanted Hye Jin to get together with Shin Hyuk but the continuing middle school jokey-ness of his character sort of put me off.

Ultimately of course, Seung Joon figures out who his childhood friend really is — that it’s the clumsy intern he hated at first but has grown to really like. And this is where I really thought this show took a step upward. He falls for Hye Jin, not just because they had a shared childhood friendship, but because he genuinely enjoys her personality as an adult. Moreover when Hye Jin has that requisite makeover/transformational moment, it’s for herself and her own self-confidence for work, NOT to get Seung Joon’s attention. In fact, when Hye Jin gets the makeover, you get the sense that Seung Joon still sees her exactly the same way as before. And once they do get together, two two are ABSOLUTELY adorable. By the final episode, all that’s left is the most perfect buttercream frosting epilogue HEA for Hye Jin and Seung Joon.

Spoilery thoughts about what also set this series apart (highlight to read):

-Seung Joon’s total support for Hye Jin to pursue her dream career apart from him, even though it means that she won’t be coming to America with him and that they have to be apart from each other for a year. The epilogue seems like it’s buttercream frosting for a romance (and it is) but underlying this light rom com is Hye Jin’s search to figure out what she wants to do with her life. There’s a voiceover by Hye Jin that talks about realizing that being “pretty” is about doing what you love, and at the end of the series, she’s very clearly doing that

-Seung Joon’s opinion of Hye Jin doesn’t really seem to change when she undergoes the “makeover / transformation,” it’s her personality that captivated him. Moreover, it’s clear that at the end of the series, when Hye Jin reverts back to her “ugly duckling” looks with her fluffy curly hair and no more makeup, Seung Joon loves her just as much. Because Hey Jin has found something she loves to, and someone to love, she’s as beautiful as ever.

-The marriage proposal between Seung Joon and Hey Jin was absolutely adorable. And wow Park Seo Joon is really good at pushing a girl up against the wall and kissing her lol.

Nobody in this romcom is an evil antagonist; everyone is trying to genuinely trying find themselves, find love and happiness as best they can. It’s light, it’s fluffy, fun, and everything I want a romcom to be. If you liked Park Seo Joon in What’s Wrong with Secretary Kim, I would definitely watch this one. (On Viki).