Miss the previous chapter? Click here to catch up!

Damian felt like he had been shot, electrocuted, and stabbed.

What had actually happened was worse.

They’d killed the succubus, but before that, she’d wounded him. And for some reason, he wasn’t healing as fast as she had. That, plus her residual effects, had the dragon inside him howling to be released, furious at the cage once more. He felt his muscles enlarging, hardening in response. With gritted teeth, he mentally forced the beast back.

“Did anyone else get hit?” he asked, looking around. Everyone present shook their heads, and he knew Max was safe in his sniper’s roost.

“Good. I need to go,” he said, and turned, heading blindly away.

It was harder to find cars to hotwire in these days of Uber, but he found one, practically pulling the door off its hinges to get inside. He’d have Mills figure out who owned it and recompense them later. All he knew was right now was he really fucking needed to get home where he could make the walls around his dragon real.

The car started, and he did a bootleg turn to race for the Briars—thinking fast—trying to keep his human side active and his dragon half down.

All of them had been touched by succubi before. It seemed like they were always waiting just outside of gates, waiting to lure the unwary. Their perceived beauty, their attention, and that pheromone kept their victims in line, while the succubi fed on them, night and day until their followers became mindless fanatics who would do anything the succubi asked—from killing their own families to disemboweling themselves for a smile.

Typically, after an adrenaline-filled hunt and exposure to the pheromones, anyone who had come in contact with the creature would have the urge to fuck everything that moved for the next few days.

Instead, it had wakened the doubts inside of him and given them a voice.

He had taken the lead because, in the past, he’d proven immune to a succubi’s touch. But tonight’s had been different. More powerful than other ones they had previously faced.

Come fly with me.

It was like the succubus had spoken directly to him. No, not to him, but to the dragon inside—the dragon who never got to fly when he wanted to, the dragon he kept with him on the ground.

Come fly with me.

He parked the car and stumbled out, ignoring the voice inside his head, pressing his hand to the keypad. The door unlocked, and he limped into the white marbled foyer.

Why the fuck had he decided to place his bedroom up all those goddamned stairs?

You could just fly.

Step by step, he dragged himself up the stairs, down the carpeted halls, and into his room, where he studiously avoided looking at himself in any of the many mirrors he used to communicate with other Realms. Right now, he was afraid of what he’d see. He didn’t want to watch the dragon surging underneath his skin.

He opened the bottle of whiskey on his bar and chugged it until it was empty. It slid down his throat—a comforting warmth compared to the violence of the dragon fire within him. No one could get hurt, and all it did was make him sleepy. Grimalkin ran in and sniffed the air, likely catching a huge whiff of succubus pheromone. His hackles raised in an instant, his tail poofed, and he hopped back three feet with a wrinkled nose.

“I haven’t smelled anything that bad since you brought me a stinking bishop.” The cat shuddered and wiped its paw at its nose furiously. “Are you okay? And did you bring me any cheese?”

“Nice to see you, too, Grim.” Damian flopped onto his bed, holding the empty decanter. Grimalkin jumped up onto the bed with him and leaned over, almost touching him nose to nose, slightly crossed blue-eyes full of concern.

“There’s green blood on the ground. Is it yours?”

Damian shrugged. “I got hit a few times. Nothing I can’t heal.”

Grimalkin’s tail lashed several times before he asked, “Did you return with as many as you left with?”

“Yes.” Damian knew Grimalkin wasn’t fond of everyone in his crew, but the cat was aware of how losing more men would hurt Damian.

“Good.” Grim’s nose was still crinkled, and his tongue was out, and Damian had the bizarre urge to tap it. Before he could do so, Grimalkin’s eyes widened, pupils as dark as the night sky, as he segued into beg mode. “You know,” Grimalkin said, voice low, like he was dying, “if you’re gonna stink that bad, the least you could do is bring me cheese.”

Damian tried not to laugh and failed. “Can’t you just magic some up?” he asked for the millionth time.

“It’s not the same.” Grimalkin rubbed his head against Damian’s jaw, muttering, “Just a little Port-Salut. That’s all I’m asking.”

“So?” Grimalkin protested, teleporting Damian’s phone onto the bed with them and into his hand. “Use the metal thing!”

“But it’s cheeeeeeeese,” Grimalkin whined, looking forlornly at the phone in Damian’s hand.

“I know,” Damian said, dropping the phone to knuckle the cat’s head. “But I’m not an asshole, okay? And if you’d rationed yourself better—”

“Rations? What’s next, American slices?” Grimalkin said, and the house around them trembled, cat and domicile both quaking at the thought. “Do I look like I can survive on Jamison’s Velveeta?” he asked Damian in all seriousness.

“No, of course not,” Damian reassured the beast. “I’ll do it tomorrow, I swear. Just…for tonight…I’m gonna need more of this. Please.” He held up the decanter.

Grimalkin waved his tail petulantly, but then blinked his eyes slowly and obliged him, filling it with whiskey again. There were benefits to having a magical guardian assigned to you at birth—once you got past its odd dairy addiction.

Damian sat up, took another swig, and then dropped back down. “How’s the girl?” Austin would have to take her home. He was in no condition—between the magical wounds he’d taken luring the succubus out, and the residual pheromones that Grim was scenting on him.

“Wet…and cheeseless,” Grimalkin said, before staring at the spot where the wall met the ceiling and rubbing a paw behind one ear. Damian had no idea what Grim meant by that, but he’d learned that sometimes it was better not to ask.

“Okay, then. Alone time. Now.” He swept his arm sideways, making the cat jump neatly over his hand.

Grimalkin pounced on his fingers and bit them gently, mumbling around them. “But tomorrow?”

The cat sprang off the bed and walked for the door. “Don’t forget!”

“Like you’d let me,” Damian said and ignored the pointed tail flick Grimalkin made in his direction. Despite how irritating his obsession could be at times, Grimalkin was the one thing from home he’d gotten to take with him from the Realms, and Damian was glad to have him.

Finally alone, Damian sat up. He was sore—sitting up made his head spin. He walked across his room to put the decanter back on the bar and took off his shirt.

You could’ve flown tonight. His own dragon now, emerging as he headed back to his bed, tormenting him with the succubi’s words.

If it wasn’t one beast bothering him, it was another. But where Grimalkin was concerned for him—at least, even if his own well-being came a close second to cheese for the cat—his dragon hadn’t cared. At all. His dragon had watched the succubus torturing people on the dance floor and been totally unmoved. It didn’t judge the succubus for doing what she needed to to survive, didn’t find her violence disgusting or cruel.

What did it say about him that something so monstrous was a part of him?

It says I shouldn’t have put the whiskey down so far away. Damian didn’t get up to get it, though, instead choosing to close his eyes and will himself to sleep.

***
Check back tomorrow for the next installment!

This is the third piece of a Instagram Collage Puzzle about the story. Come follow Kara on Instagram for more and see how the picture develops! 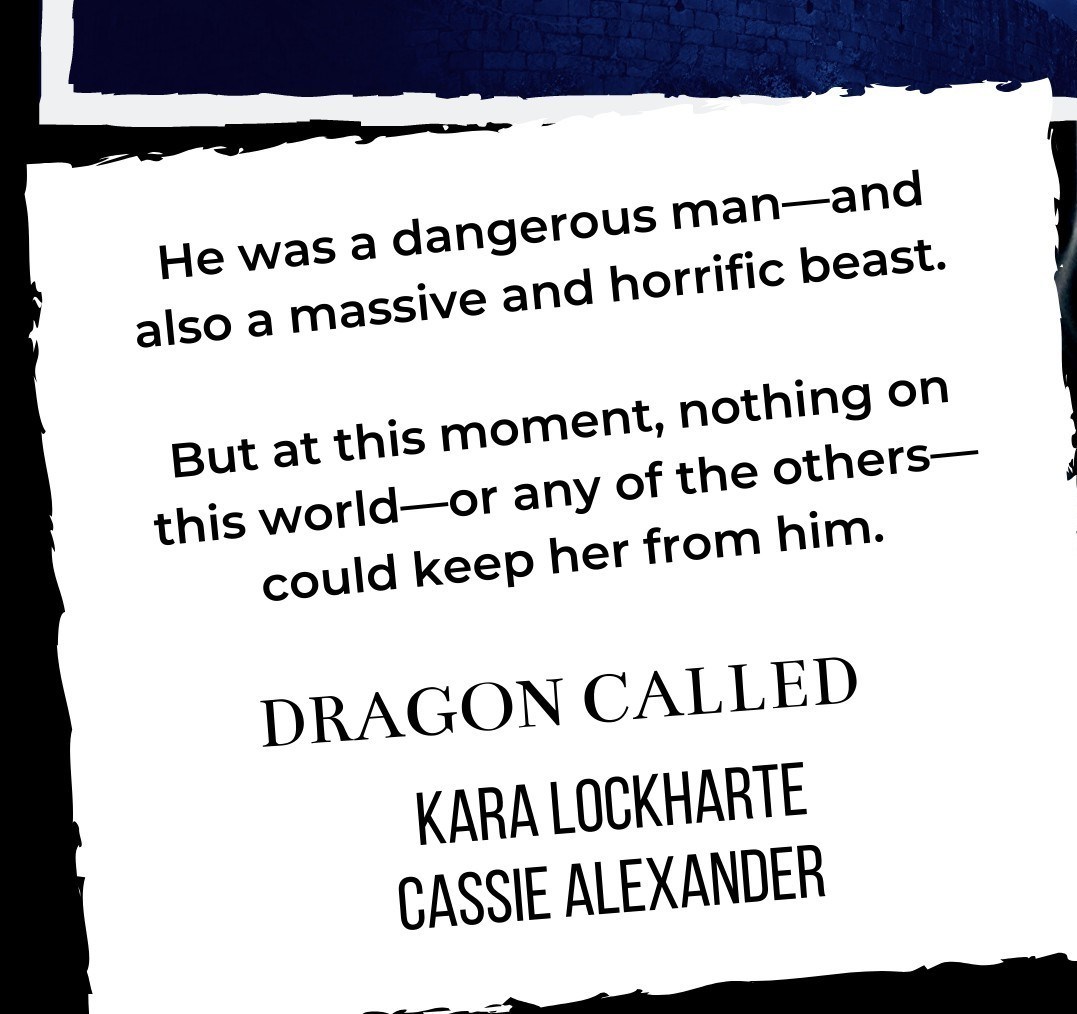 Click here NOW to enter the Goodreads Giveaway for your chance to win a FREE copy of the full length novel of DRAGON CALLED!