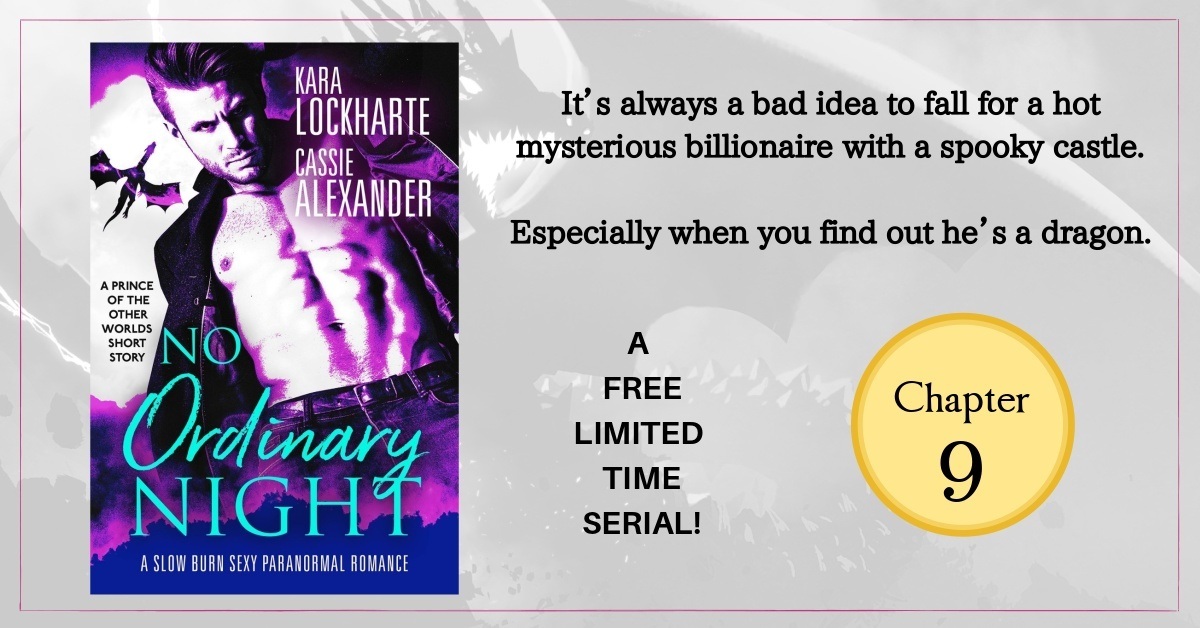 DO NOT LET ANYTHING HAPPEN TO HER! his dragon shouted at him, as though there was a chance in hell he might.

Shut it! he shouted back at it. He scooped her up as she shrieked, racing her back into the house and through the halls. How much Unearthly blood had touched her? How long had it been in contact with her skin? The closest earthly comparison was like phenol—an acid that numbed you as it burned—incredibly dangerous, and one of the many reasons all his men had magical protections.

“Damian!” She was pounding her fist on his chest, and he was entirely ignoring her until they reached the room with his dragon’s bathing pond. He threw her far out into the water and then leapt into it himself to swim after her.

She bobbed back up, spitting water—and spitting mad. “What the fuck!”

“The blood is dangerous. You have no idea.” He hauled her up to inspect her side.

“I’m half-naked!” she shouted at him.

“So? I’m all naked.” He reached for her to inspect where the blood had brushed her skin. It had already erupted into a bright red welt. He dunked her back into the water, chest-height, and started swirling water quickly past it with a hand. She stood in the water on her tiptoes, panting angrily, water flowing over her breasts with each sweep of his hands, nipples pebbling in the pond’s chill. Shit. “Grim, heat the pond!” he commanded.

“Do you want to explain what the fuck is happening to me right now?” She moved to cross her arms, to hide herself from him, but he caught her wrist just in time. He couldn’t risk her getting burned elsewhere.

“I’m sorry. I know this is strange, but some Unearthly blood is acidic. Or poisonous. Depending on the monster.”

Will she be all right? His dragon rushed forward inside him as if to see for himself.

STOP THAT, Damian commanded. Since when had his dragon ever given a fuck about a human?

Andi slowly lowered her head down to look at her side. “Don’t,” he warned her.

“I’m a nurse, okay? Let me see.” She pushed his hands away and held her arm up, while holding her breast out of the way, rocking forward out of the water to look. Watching her touch herself, even for clinical reasons, did dark things to him. Damian wished the water was opaquer. “It doesn’t look that bad,” she went on.

“We caught it in time. But you’ll need to stay in here for a while until it’s all diluted—just in case.”

She carefully crossed her arms high on her chest, fully covering herself from him. “Fine.”

Had he been looking that greedily? If so, who was to blame? The remnants of the succubus’s sting, his dragon, or him? All three? His dragon was roiling inside, beside himself with proprietary concern. He could still feel the surges of inappropriate lust—surely just his succubus-caused hangover from being attacked last night—and he’d be lying if he said she wasn’t beautiful now. The perfection of her breasts, curve of her neck, the way her hair flowed –after her kissing him earlier, it was all too easy to imagine them entwined together, his lips on her neck, her breasts pressed against him, his cock seated deep.

Damian quickly swallowed and splashed his face, trying to get his head clear. She would have to forget all this—he should not, could not get attached. It would only make it hurt more later.

Pain is fine, his dragon disagreed.

No one asked you, he told it.

Andi watched him splash himself beside her, totally in his element. Less than three minutes ago, she’d been flirting with a dragon, and now she was half-naked in the water with one. Oh, and also burned by acid from monster-blood—because that was a thing that could happen. And to think they never covered that in nursing school.

Damian dunked himself then resurfaced, snapping water out of his hair with a quick shake, before he looked at her again. She could tell by the way he was trying to look at her eyes and not down at all that he was trying very, very hard to grant her some privacy—and she was trying to do the same. Only the way his shoulders breeched the water and how she could see his biceps every time he moved his arms was pretty damn distracting—as was the rest of him. His wide chest narrowed down to abs that were as rippled as the water they both stood in—the expression on his face, dark and brooding like a storm. He was almost too hot to be real—which made sense because he was a dragon. A dragon. An actual, real, honest-to-God, wings-and-all dragon.

She let herself drop into the water, letting it surround her so that she could think. Then she made the mistake of opening her eyes and found herself at Damian’s waist height—and the view below was not any less distracting than the view above. She sprang out of the water, back to her feet again.

If she slept with him—an “if” that was getting smaller all the time, turning the corner into a “when”—chances were, she would have a very good time.

“Are you okay?” He leaned closer, his voice full of concern. She had a feeling he was asking about more than the burn.

“Yeah. Why wouldn’t I be? I just almost died two or three times, plus met a dragon. One that I kissed for some strange reason, earlier in the night.” She laughed nervously and rose up on her tiptoes, the seam of his jeans riding uncomfortably-comfortable between her legs.

He grunted. “About that…that wasn’t you.”

“No…literally. You weren’t thinking right. You were under a spell.”

Of course, she was, Andi thought with a titter. That made as much sense as anything else. She covered her breasts with her elbows and splashed her face with water to buy herself time to just calm down and think, because if she didn’t, she was going to have a panic attack. She released a breath and gathered herself before addressing him again. “So, what now?”

“Now—we wait. To make sure there’s no way you’ve been burned. And then after that,” Damian closed his eyes and shook his head. “I can’t claim to know. There’s a room in my house that has Forgetting Fire in it and I should take you there to erase all your memories.”

Her heart jumped into her throat and trembled there. “You’re kidding—right?”

“I’ve done it before to others,” he said to her and shrugged, not without kindness. “You don’t really know me Andi. And—you shouldn’t. Look how much danger you’ve already been in at my side. I never should’ve hired you, muchless let this morning happen. But,” he said slowly, looking over at her as if daring himself to do so. “I’d rather not do that to you.”

“Well I definitely don’t want that, so it’s settled.” He snorted softly as she went on. “So you’re going to tell me everything, right?” That was the least he could do after making her live through last night.

His eyes widened. “Not if I can help it.” He looked away from her, a lock of dark wet hair falling into his face. “Andi, no one can know what we are. Or what we do. Which is why when you leave here, you can’t talk to anyone—and you can never come back.”

She watched him set his shoulders like he must’ve done a million times before, ready to take on a burden that no one else even knew he carried. “Isn’t that…lonely?” she asked.

“You have no idea.” Damian gave her an infinitely sad smile, then angled his head down again. “May I?” Andi frowned, but bounced up on her toes so that he could lean down and see the underside of her breast. “Good. The swelling’s gone now. It’ll only leave a small mark, if anything.” He put a hand out to touch her, then stopped himself—and she found herself wishing he wouldn’t have. It’d been so long since someone had looked at her the way he did, with the hunger in his eyes. She could watch him denying it, pretending to be normal, as he said, “Come on, let’s go to shore.”

She uncrossed her arms and began sweeping herself in the water, thinking hard. When was the last time she’d ever met anyone like him? Would she ever get the chance to, again? “I…don’t think so.”

His brow furrowed in confusion. “You’re safe with me, Andi. I swear I won’t make you forget your memories of being here.”

She shook her head and laughed. “I honestly don’t think you could, I don’t care how much magic you used,” she said, pushing herself into deeper water as she slowly made up her mind.

“You’re lucky we won’t be testing that then.” He surged after her, his golden eyes watching her, as he hovered in the water not that far away. Andi remembered the way he’d been staring at her earlier in the night—and it was having the same effect on her now, it stole her breath away. “Where do you think you’re going?” he asked as she took another sweep backwards and he matched it.

She looked at him, and around the room they were in, and thought back on every crazy thing that’d already happened with him. The thought of forgetting any of it was impossible—and the thought of leaving it behind her was almost just as bad. She watched his strong arms break the water to hold himself up and remembered what they’d felt like, holding her—and what she’d felt while kissing him. Even if it was a spell that made her do it—once she done it—there was something there. Something she didn’t want to give up on so quickly.

“You said if I leave I can’t come back. So what if…I don’t want to go just yet?” she asked while holding herself aloft, her breasts bobbing in the waves her arms created.

He paused in swimming and she watched him sink. “Andi,” he said, making her name a whisper as his eyes narrowed in concern, “you don’t know me.”

A long moment passed between them like a current of electricity—and then he swam for her.
***

Check back tomorrow for another installment!

***
This is the eighth piece of a Instagram Collage Puzzle about the story. Come follow Kara on Instagram for more and see how the picture develops! 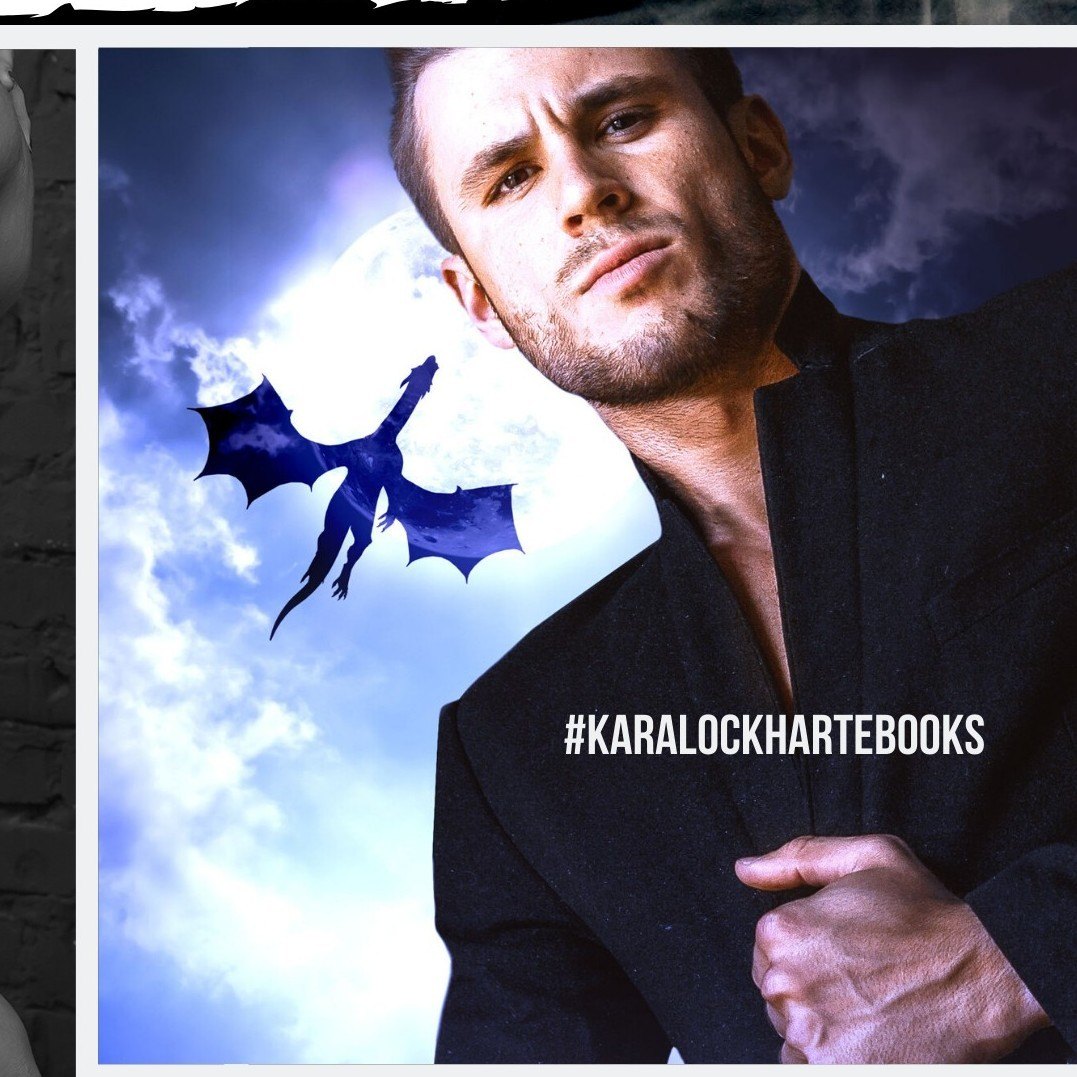