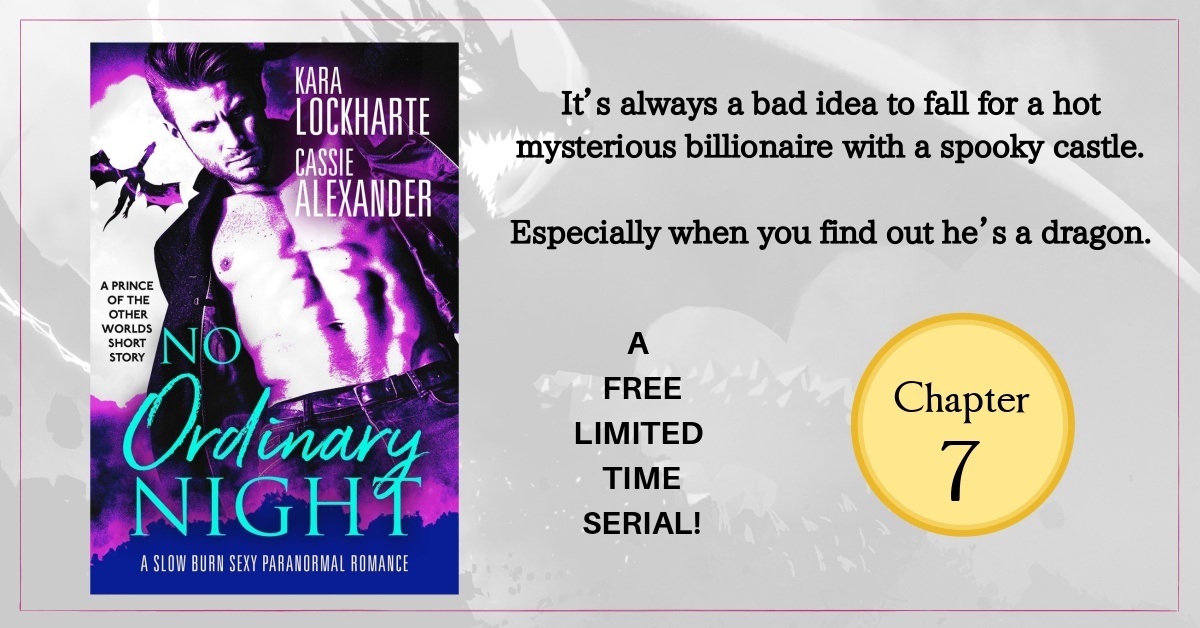 Andi was swung over Austin’s shoulder and started hitting his back with closed fists. “Hey! What the fuck!”

Austin ignored her and started to run toward the garage. He swiped a keypad with his hand—she watched him do it through his armpit, and then ran with her inside, knocking the air out of her lungs with his broad shoulder. “Get your hands off of me!” She grabbed hold of his belt and used it to brace herself, trying to slide forward. He completely ignored these efforts and any impropriety, hitching her back up by her crotch.

“HEY!” she shouted, twisting to try to knee him in the head.

“It’s for your own safety,” he explained, grabbing hold of her waist again. She thought he was about to set her down, but no, he held her under his arm. Her hair swirled, blocking her vision, but then she heard a latch open, and he threw her into a tiny space with shelves and a metal plated floor.

Andi got to her knees and inhaled because she was an excellent curser in three languages and she was about to tell Austin off, but the look of fear on his face stopped her cold.

“Keep quiet. You’ll be safe in here,” Austin said and shut the door. She heard it lock, heard him leave, and knew she was alone in the dark.

Andi felt around the edges of the space she was in. Judging by the curve of the ceiling and the way she was barely able to stand up all the way inside, she thought she was in a van.

“Fucking asshole serial killer,” she muttered to herself. Sammy’s fears were right.

She patted her pockets. Her phone must’ve fallen out of her pocket on the way here—same for her envelope of money. All this trouble, all for nothing, and now… She moved her way up to sit on what seemed like a bench.

“What the hell have I gotten myself into?” She brought her knees up to hug to her chest. Why the klaxon and why the shutters? It’d have been an elaborate ruse if all that had happened just to kidnap her now after she’d been here all night. Same thing for if they didn’t want to pay her—a month of pay was a lot to her, but not to Damian and his eight-hundred-dollar shoes.

She pulled one of them off and beat it against the side of the van.

“Can anyone hear me?” she shouted, then thumped some more. “I’m in here! Let me loose!” She took out all her frustrations on the van’s interior, beating on it like it was a piñata. “Get me the fuck out of here!”

When she was done, she threw herself back on the bench, exhausted and panting, just this side of crying herself to sleep when something thumped back hard enough to make the entire van rock.

“Hello?” she whispered. Why hadn’t she thought about the freaking fist-sized bee stinger before she’d made that much noise?

The van rocked again, as whatever was outside hit it from the other side. Andi bit her lips not to scream and scurried underneath the bench, pressing herself against the wheel well, feeling the pattern on the cold metal floor press against her skin.

She breathed in and out into her coat—half to calm herself, and half to mask her breathing. Whatever was outside… Oh, God…oh, God…oh, God.

But it was gone now. Right?

Andi lay stock still trying to see in the dark, and phantoms came—the kind you get when you rub your eyes too hard. Shimmers of gold with stripes of green—only her eyes weren’t closed. She was filled with a sense of unholy dread as she realized something was materializing inside the van with her.

In the coin toss between dying lying on the ground and dying trying to escape, escape won. She rolled herself out and up and ran for what she thought was the front of the van and searching against the wall there for something—anything to help her—and on her second panicked pass through, she found it—a latch so flat it couldn’t catch on anything. She popped it open so hard she broke a fingernail, but then fluorescent light flooded through. The van was still in the garage. She crawled through the hole—no way it’d been meant for that, probably just a pass through, she was just lucky she was small—and fell into the van’s cab.

The van rocked behind her, and she heard the sound of something slithering. She kicked the pass-through shut and lunged to lock it just in time. A solid thump jarred her.

Whatever was back there was pissed. She whirled in the driver’s seat, looking for something to protect herself with, and caught the glint of keys. In the ignition. Because when you had your own garage inside your own fortress, there was never any reason to take them out. She froze for an instant, trying to remember how it was that people did these things in movies, then twisted the keys wildly. The engine sputtered, and lights came on. She stomped at pedals indiscriminately, and the van threw itself backward. She heard it hit god knew what, but more importantly, whatever was inside the van had fallen backward—hard.

Her panicked hands scrambled over the console, trying to figure out what was what and put the van into D because it had to be for Drive, didn’t it—if R was for reverse? And then she stomped on one pedal. Nothing happened, so she stomped on the other, and the van lurched forward, racing fast.

“Oh, shit!” she shouted, as the entire van ran into the garage door and it rocked forward. She kept her foot on the gas and heard the tires spinning as they tried to crawl up the bent doors.

“Come on!” She shoved herself forward as if her own slight weight would somehow help things as a shimmering began beside her. “Oh…no…come on!” She beat her hands on the steering wheel, and the van revved up a fraction of an inch higher—high enough for the wheels to catch on some mechanism of the door itself, pull itself almost vertical, and then the weight of the van crushed the garage door down and forward like a soda can. The van ran over the remains of the door, bouncing like it was going over craters on the moon, and then headed straight toward the fountain she’d thought was so pretty in the night. She only had time to scream before she crashed into it.

She was flung forward, and the steering wheel knocked the breath out of her. Gasping, she rolled toward the door, her foot still on the gas. The thing shimmering beside her hadn’t stopped. It was growing more solid, and she didn’t want to know what it was. The mere fact that it still existed in daylight meant that it was bad. The klaxons hadn’t stopped alarming; they were louder now that she was outdoors. Andi opened the door and fell—the van had jumped onto the fountain’s wall, leaving a three-foot gap between her and the ground. She landed on her forearm and scraped the shit out of it, shouted in pain, and then crawled away until she could gather herself enough to run—only to find that there was a golden-metallic shimmering ahead of her now.

She crouched, panting. She’d lost one of Damian’s shoes, her elbow was bleeding onto his dress shirt, and there was a thing hunting her—was it real? It had to be. She took off Damian’s other shoe and threw it at the golden glow, only for it to bounce back.

More and more of the striped monster—that was the only word she had for it, that had to be what it was—was forming. Too many limbs and three tails; it was like a cross between a tiger and a centipede, and it had an almost human face that wouldn’t stop grinning.

Andi drew in on herself. The thing could move through walls. There was nowhere she could go that it wouldn’t be able to touch her. She was going to die here, and she wouldn’t know what killed her.
***
Check back tomorrow for another installment!

***
This is the sixth piece of a Instagram Collage Puzzle about the story. Come follow Kara on Instagram for more and see how the picture develops! 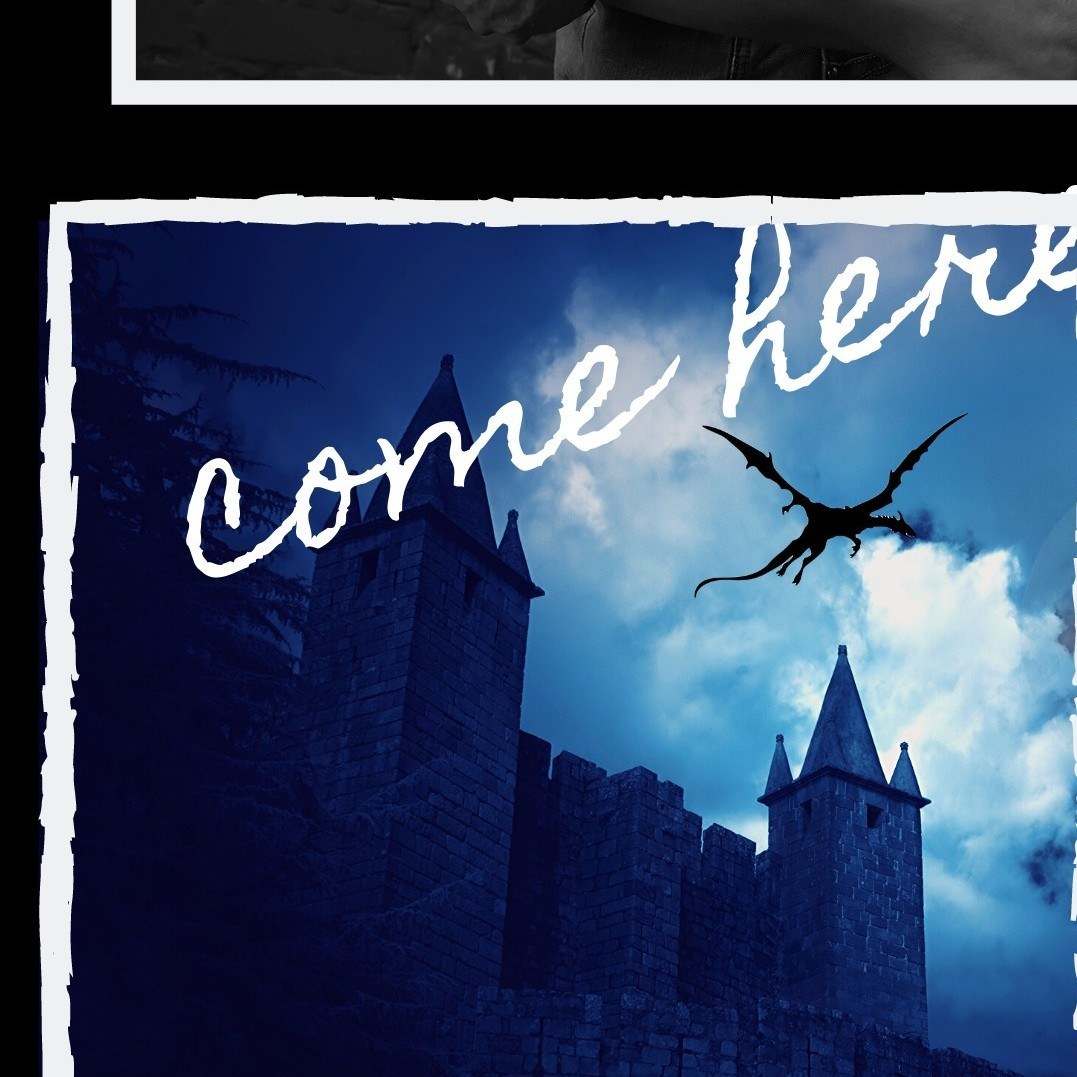