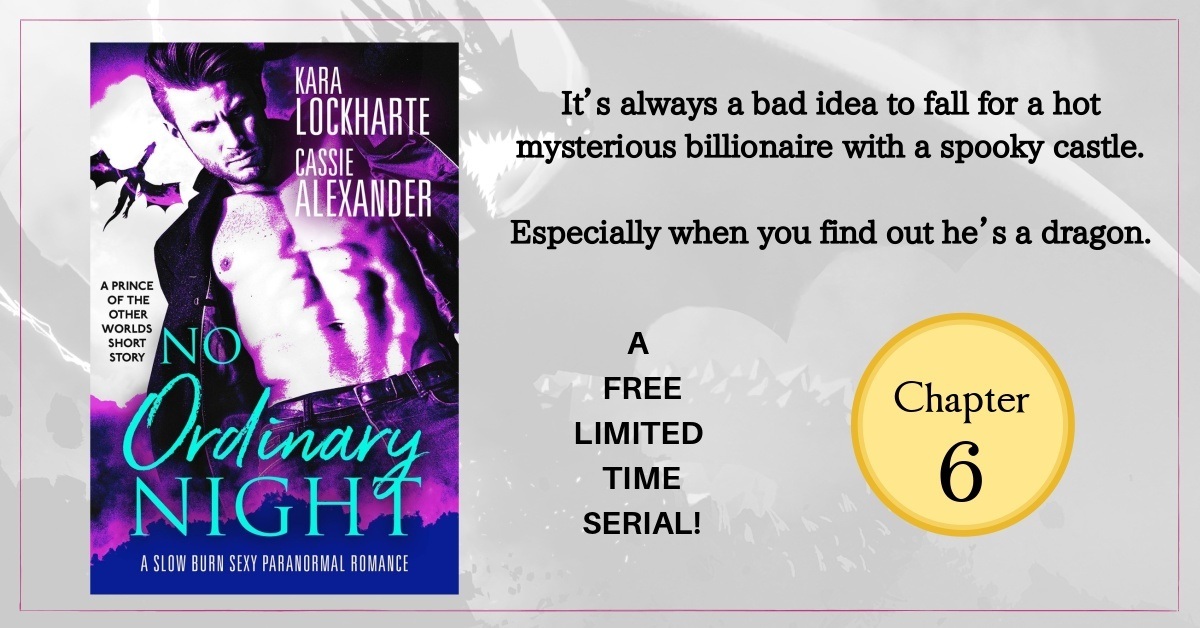 When Damian closed the bathroom door, Grimalkin was waiting for him, sitting primly on the marble counter, tail lashing up and down.

“I put the stinger in your office for you and cleaned up all the blood.”

“And not a moment too soon,” Damian said, leaning back against the closed door. He wondered how long it’d take Andi to vacate the premises. She was right behind the door now, probably not even dressed, putting his clothing over her taut, tight body—that he’d gotten to briefly touch.

Why did you stop her? his dragon asked. Part of being a shifter was experiencing one another’s feelings when paying attention, and when Andi had started kissing him, his dragon had been fully present.

Because it wasn’t real. We stank of succubus.

His dragon pondered this. It felt real to me.

It had, hadn’t it? It’d seemed like the most real of dreams. Waking up to a beautiful girl taking an interest in him, wanting him to take interest back. Everything in him had longed to answer her, and he would have done so, eagerly—thoroughly—if he hadn’t remembered the succubus’s scent.

You should have let her continue, his dragon said.

And not for the first time, Damian realized his dragon wasn’t big on consent. It wasn’t worth getting into with the beast. Especially because his dragon was inside him; it knew how hard he’d been tempted. He thumped his head against the door’s solid wood.And if he kept thinking about it, he’d be as hard as the door behind him. Fucking pheromones.

“…and you told me that you would heal,” Grimalkin said, pointing his tail at Damian for emphasis, and Damian realized he’d lost some of his cat’s words while thinking about Andi. He pushed away from the door and into the here and now.

“I would have. Except for the succubus stinger in the way.”

“That you didn’t know that you were hit with.”

Grimalkin wove his head back and forth in grand disappointment. “This is why you need a mate. It is easier to clean all the places that need cleaning if you have someone else’s tongue helping you.”

It wasn’t the first time his protector had urged him to find someone—and, unfortunately, Damian knew it would not be the last. “I’m alive, Grim. I mean, come on, a stinger might’ve made me pass out with poison for a little while, but it’s not like it was going to kill me.”

Grimalkin jumped down to the bathroom floor and reached up with both front paws, planting one on each of Damian’s thighs, gently pricking through his slacks with his claws. “If something happens to you,” he began, and Damian leaned down to pay attention as his cat’s eyes went so wide, they were almost all pupil. “Who is going to buy me cheese?”

Damian laughed and gently kneed the cat down. “It is tomorrow, now, isn’t it?” he said, reaching for his belt buckle.

“Very much so. But you can shower first,” Grimalkin allowed him, with a wrinkle of his nose.

The second Damian was gone, Andi tried a door that was not the bathroom, found his closet, and resisted the urge to just hide inside.

What on earth had just happened to her? She’d told Damian she wouldn’t ask questions—of him!—but that didn’t mean that she wouldn’t spend the next three months asking them of herself. What the hell? Green blood? And the entirely inappropriate way that she’d pounced on him? That wasn’t like her at all.

There are dragons in this world, my dear. Real dragons. Beware.

Auntie Kim’s warnings echoed in her mind, and after the night she’d just had, dragons seemed downright sensible, so, sure, why not?

She tamped down her upcoming freak-out and found jeans that were far too long for her, cuffing them up and belting them tight, before rifling through his closet for a shirt. They were all dress shirts, so she picked the nearest one and tied it at her waist—if she’d tucked it in, it’d have gone down to her knees.

Last but not least, she put on the shoes he’d evidently kicked off on his way in—which were far, far too big on her, like clown shoes almost—and tried to remind herself that it didn’t matter that she wasn’t getting her own shoes back, because with what she was getting paid she could definitely buy new ones.

She caught a blurry glance of herself in one of the many bedroom mirrors on her way out. She looked like she was very ineptly playing dress up. Whatever! She just needed to take a shower at her own place—and crawl into her own bed and forget this unbelievably strange night—and forget him. She glanced back at the closed bathroom door and heard the water turn on. Whatever was going on here, he was at the center of it. He was trouble, for sure.

Andi growled at herself, then picked up her bag of wet clothes left by the bathroom door and stepped out of the room.

“HEY!” she yelled, her voice echoing through the apparently empty corridors. “Is anyone here?”

To her surprise, Austin was waiting for her by the time she got to the lower level, and he seemed surprised to see her. “Damian didn’t take you home?”

“Nope,” she said, as his eyes took her outfit in.

“Damian…took you to bed?” Austin guessed.

Andi rolled her eyes. Not for lack of trying on her part for a bit there. “Also, no, although not that it’d be any of your business if he had.” She wondered what it meant that that’d been Austin’s first guess—did Damian have a revolving door? He was rich and impossibly handsome; of course, he got laid—all the time, probably.

And none of those women had realized he wasn’t human like she had.

“I pulled a weird purple thorn from him. He was bleeding green blood,” she said calmly, watching Austin’s reaction.

Austin looked at her, a mixture of surprise and wariness in his eyes, clearly wondering how much she knew, how much she would ask him to explain.

“Don’t worry. He’s fine. He told me to find you and have you pay me and take me home.” She stopped, and Austin looked at her, clearly waiting for her to ask more questions—questions she desperately wanted to know the answer to!—butshit with her brother had taught her that sometimes it was better not to get involved. “Look, I’m tired and I’d just like my money and a ride to the bus stop.”

Austin hesitated for long enough that she started to get worried, then shook himself and said, “All right. Wait here.”

He returned with her coat and a large envelope. Before he handed it over, though, he glanced down. “Do you know those are eight hundred-dollar shoes?”

Andi stopped herself from gasping in time. “So?” she said instead, defiantly.

“I know. I can mail them back, all right?” She pulled her coat on roughly and found her own phone in its pocket. “I don’t want to talk about what happened to mine. Just take me to the bus already.”

He looked her up and down again. Something about her current situation made him uneasy—but it didn’t stop him from leading her outside.

She did as she was told, waiting on the mansion’s marble stairs as Austin went to retrieve a car. Dawn was rising over the horizon, and from this height, the light spilled over the hills, making the morning breathtaking. A light breeze pushed the scent of roses her way and picked up a lock of her hair to play with.

Out here, it was like last night had never happened—like it wasn’t even real. Like the entire night had been a bad dream—except for the part that hadn’t been.

And her kissing him.

She was almost glad she hadn’t asked questions because if Austin had lied to her—which, of course, he would’ve; he’d have to—she’d have started to doubt her own two eyes.

Because that blood had not been human. Maybe that green stuff was what they pumped you with when you were rich enough to get to pay to somehow live forever? She fought not to nervously laugh at herself. She’d be on the bus soon, and she didn’t want to seem crazy with a fist-sized wad of cash inside her pocket.

But where was Austin? Was he ghosting her?

Maybe Damian was…a ghost? And that green stuff had been ectoplasm?

Andi put a hand to her head, feeling the edge of a no-sleep headache approaching, knowing she needed to get to bed soon before she could think about anything else stupid—crazy, impossible—and real.

And then, just like it’d been designed to set off a migraine, a klaxon started wailing from somewhere behind her.

Andi whirled to look back at the house. “What the—” she got out before the lights on the inside of the house went red, and the metal shutters started loudly rolling down outside, cutting through ivy and beginning to cover all the castle’s windows.

“Fuck,” she breathed as a car pulled up behind her.

“No time to explain,” he said, and just as she’d imagined earlier in the night, he picked her up and put her over one shoulder.
***
Check back tomorrow for another installment!

***
This is the fifth piece of a Instagram Collage Puzzle about the story. Come follow Kara on Instagram for more and see how the picture develops! 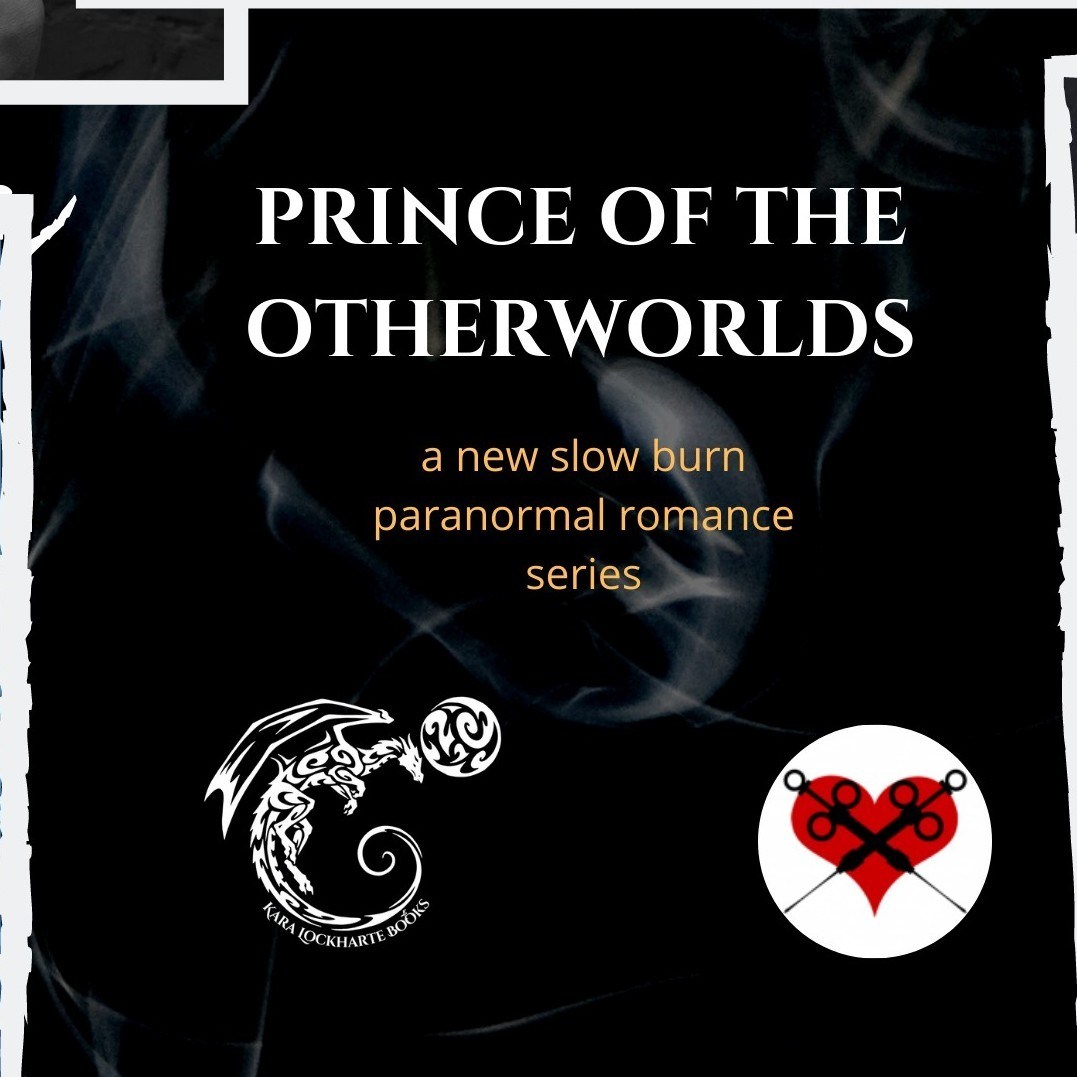 Prince of the Otherworlds.